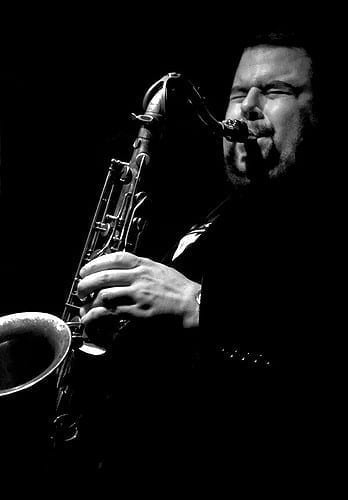 Signed to Chicago’s Delmark Records as a teenaged-native-son-protégé of Von Freeman, the now 41-year-old Frank Catalano has become a distinctive improviser, prolific composer, patented inventor, brand ambassador, and unparalleled collector of vintage saxophones. With his distinctive voices, both in speech and on saxophone, Frank exudes infectious enthusiasm. He has been described as a traveling locus of creative energy — seemingly interested in, and good at everything.Frank’s early professional career was marked by an accident in which the middle finger of his right hand was severed then reattached. He had to re-learn the saxophone, sparking a stylistic expansion from his Chicago-school roots to being featured in bands across the jazz and pop spectrum on recordings by Jennifer Lopez, Destiny’s Child, John Legend, and Seal.After stints recording for Savoy Records and producing records for Columbia, Frank landed at Rope-a-dope where his four Billboard Jazz Chart topping recordings featured jazz-playing rock stars including drummer Jimmy Chamberlain from the Smashing Pumpkins and saxophonist David Sanborn.