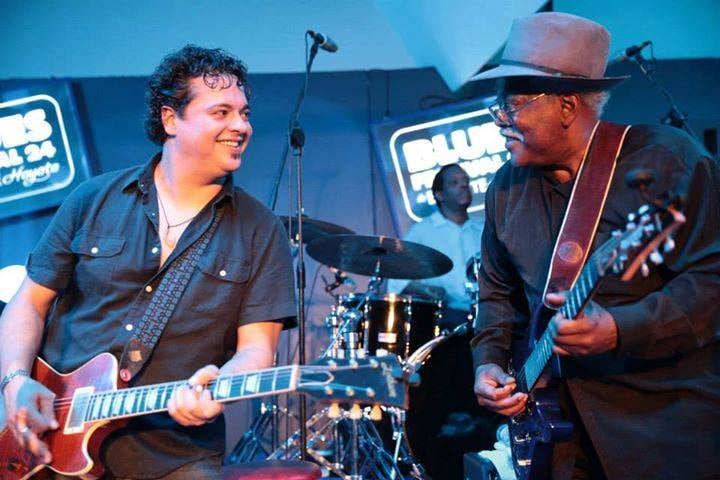 Singer, guitarist, and songwriter, Jimmy Burns is a contemporary bluesman who combines his Delta roots with R&B and soul to come up with a sound uniquely his own. Burns is a charismatic performer with an expressive, soulful, voice and a melodic guitar style to match.

As R&B turned to soul in the 60s Burns cut a few soul singles for the USA, Minit, Tip Top and Erica labels. One of his Erica singles, I Really Love You, is a collector’s item in Great Britain. Burns traveled throughout the Midwest, with a band called the Fantastic Epics. They appeared at the Arie Crown Theatre in Chicago on a bill with Jeff Beck and the Yardbirds. He formed his own band in the late 60s called Jimmy Burns and the Gas Company.

With the blues never far from his soul, Burns returned to playing full-time in the mid-nineties. He started out with a regular gig at Smokedaddy’s in Chicago, and it wasn’t long before Bob Koester of Delmark Records signed him to record a CD. Leaving Here Walking was a hit right out of the gate, winning Best Blues Record of the Year, from the National Association of Independent Record Distributors (NAIRD), the French Academie Du Jazz’s Big Bill Broonzy Award, and two W.C. Handy Award nominations. National and international tours followed, as Burns played to enthusiastic audiences in clubs and festivals across the country, and in Europe, Canada, and Japan.

Dave Herrero got his start as a professional touring musician in 1996 in Jacksonville Beach, Florida, then moved to Austin, TX and joined Archie Bell and the Drells (of “Tighten Up” fame). In Austin, he quickly immersed himself into the Austin music community, playing with the likes of Gary Clark Jr, Charlie Sexton, Lazy Lester, Matt Powell, Seth Walker all the while starting the Blues Society of Austin with friends, Mark “Kaz” Kazanoff, Nancy Coplin and Nicole Shiro. It was in Austin that Dave honed in on his guitar playing, singing and songwriting skills, that he then took with him to Chicago.

In Chicago, Dave teamed up with his brother, acclaimed hip-hop producer Mike Hero, and old friend and accomplished songwriter, Felix Reyes. While Dave, Felix and Mike produced Dave’s second album, “Austin to Chicago”, which garnered a nomination for the 2009 Illinois Blues Blast Award Debut Artist of the Year, Dave and his brother started a production company, TrackForce Productions, and began making music for Harpo Productions (The Oprah Winfrey Show / The Dr Oz Show). It was during this time that Chicago Blues / Soul legend Jimmy Burns asked Dave to co-produce his album, “Stuck in the Middle”. produce his album, “Stuck in the Middle”. The band consists of…